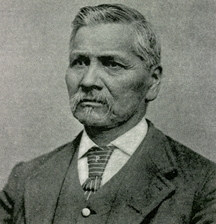 A Brief History of Indian Legislative Representatives in the Maine Legislature by S. Glenn Starbird, Jr., 1983.
Updated by Donald Soctomah, 1999, and by Donna M. Loring, 2001

The earliest State of Maine record that representatives were sent from the Penobscot Nation is in 1823, and from the Passamaquoddy Tribe, 1842. At that time, there was no state law regarding election of Indian delegates or representatives to the legislature and the choice of this person or persons was determined by tribal law or custom only. Massachusetts records show that the practice of the two tribes sending representatives to the legislature was not new with the formation of the State of Maine in 1820, but probably had been going on since before the Revolutionary War.

The differences between the Old and New parties in the Penobscot Nation caused such confusion that the two parties signed an agreement in 1850 which provided, among other things, that "an election should be held every year to choose one tribal member to represent the tribe before the legislature and the governor and council." This agreement governed the choice of representative until the legislature passed the so-called "Special Law" of 1866, which, with the tribe’s agreement, finally settled the procedures for election for not only its representative but for governor and lieutenant governor (now known as chief and sub-chief) as well.

A similar agreement setting forth the form of their tribal government was made between the two Passamaquoddy reservations in what is known as the "Treaty of Peace of 1852." The system of government established by this document has remained unchanged in its essential provisions ever since, although it was not enacted into state law until the Passamaquoddy Tribe petitioned the legislature to do so in 1927. Among the Passamaquoddy, the representative was to be elected alternately from each of the reservations. The Passamaquoddy have two reservations, Sipayak (Pleasant Point) is located near Perry, Maine, and Indian Township near Princeton, Maine.

Over the last half of the nineteenth century there was a gradual growth and development of the Indian representatives’ status in the legislative halls. Only from the middle 1890s was there verbatim legislative record made, and not until 1907 was it provided with an index, but from that year on we can read clearly the record in session after session where the Indian representatives were seated, sometimes spoke, and were accorded other privileges.

This gradual improvement in their status resulted in an effort during the 1939 legislature to place Indian representatives on a nearly equal footing with the others. This effort failed, however, and the 1941 session passed legislation that ousted the Indians entirely from the hall of the house, reducing their status to little better than state-paid lobbyists. Since 1965, however, a gradual change for the better has occurred. Salaries and allowances have increased, and seating and speaking privileges were restored in 1975, after a lapse of thirty-four years.

The closest analogy to Indian representation in the Maine State Legislature now existing is probably the federal laws that allow the territories and the District of Columbia to seat delegates in the federal House of Representatives. Under federal law and House rule, a delegate can do anything a regular House member can do except vote on pending legislation. He/she can sit on a committee and vote in committee; he/she receives the same salary and allowances; and for all practical purposes, except the House vote, does what any member of Congress can do.

Opinions by the Office of the Maine Attorney General over the years seem to support the position of Indian representatives in the Maine legislature as very similar to delegates of the territories in Congress under the law and house rules as they now stand. At any rate, it is to be hoped that improvements in status will continue, for with the settlement of the Maine Indian land claims in 1980 establishing an entirely new relationship with the state, the need for competent representation of the Indian tribes in the legislature is more vital than ever.

The provisions are these:

Under these provisions tribal representatives:

The Wisconsin, New Brunswick, and New Zealand legislatures are reviewing Passamaquoddy and Penobscot representative status to use as a possible model. The results of those studies are unknown at this time.

Note: The above narrative concerning Indian representation in the legislature is based on information derived from the legislative record, federal and state rules, State Department reports, Maine public laws, resolves, private and special laws, federal laws, newspaper articles, and other published accounts.

1 Final Report of the Committee to Address the Recognition of the Tribal Government Representatives of Maine’s Sovereign Nations in the Legislature
2 The Joint Standing Committee on Maine’s Sovereign Nations Native Representation is the most recent in-depth study of the duties and history of the tribal representatives. It sets forth recommendations to both houses of the legislature, which to date have been ignored.
3 This was the latest joint rule to be past during the 120th legislative session.

Guiding Henry David Thoreau on Pine Stream, a tributary of the West Branch of the Penobscot River, Joseph Attean kills a moose.